Here is a Powerpuff Girls fanfiction of mine, which is based off of a Captain Caveman episode from the Flintstone Kids entitled, "Captain Cavedog." In this story, during an interview, the go-go girls eat three banana splits, little knowing that they were left my the maniacal monkey menace Mojo Jojo, and end up turning into monkeys! Upon learning that the effect will become permanent in one hour, the Powerpuffs have to hurry and catch Mojo to retrieve the antidote or risk eating bananas and swinging on vines for the rest of their lives. Please enjoy!
The Powerpuff Monkeys?﻿
﻿

Posted by iheartkatamari at 11:34 PM No comments:

Dopey Dan is visiting the beach for the first time, carrying a bucket in one hand. He walks up to the lifeguard and inquires, "Excuse me please, Ma'am. How much does a bucket of water cost?"

The lifeguard decides to have some fun with him and says, "Twenty-five cents. Please take as much as you like."

"Thanks!" Dan replies, upon which he traipses down to the shore, fills up the bucket, then hands the lifeguard a quarter.

As evening falls, it's lowtide; observing the ebbing tide, Dan turns to the lifeguard and says, "Boy, looks like you've certainly had some business day!"

From Nickelodeon Magazine.
Posted by iheartkatamari at 11:19 PM No comments:

Here is a Powerpuff Girls fanfiction of mine, in which Mojo Jojo, whose latest evil scheme proves to be too big for one evil monkey to accomplish, takes those rowdy reptiles themselves, the Gang Green Gang up as assistants...but will they end up doing more harm than good?(Or should we say more harm than bad?) Please enjoy!


With Henchmen Like These﻿
Posted by iheartkatamari at 10:49 PM No comments:

Long, long journey through the darkness,
Long, long way to go,
But what are miles across the ocean
To a heart that's coming home?
Here is a Pound Puppies fanfiction, which is the ninth in a series created by fellow writer brave kid and me. In this story, the Pound Puppies and Kennel Kittens lead an expedition to reunite newly impounded kitten Spoons with her family, who live beyond the forest and through the mountains, but a very persistent Milton Feltwaddle has other ideas! Please enjoy!
Pound Puppies Generation Gap: The Long Journey Home
BTW, here are a few pictures of the story's characters:
Spoons the lost kitten and her puppy pal Bumper, who misses her just as much as her owners, both of whom originally appeared in the episode, "Hello Kitten." 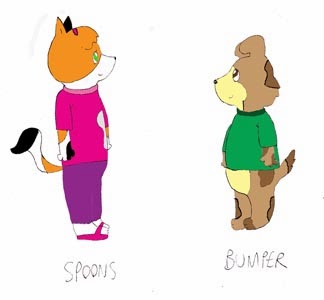 Buddy the friendly coyote who guides the group on their quest through the mountains. He originally appeared in the episode, "Rebel Without a Collar" in which he was a dog.

And the parents of Suzanne, Spoons and Bumper's owner, who appear in the beginning of the story. 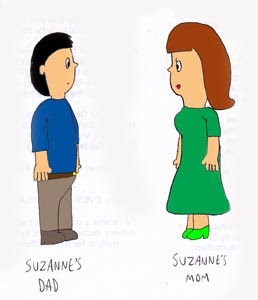 Posted by iheartkatamari at 12:03 AM No comments:

An outlaw in the old west has been captured and taken to the judge.

Judge: "Is it true that you've held up several trains in this area?"

Judge: Where did you hold up the trains?"

Outlaw: "Here and there."

Judge: "What did you steal from the passengers?"

Outlaw: "This and that."

Posted by iheartkatamari at 11:33 PM No comments: 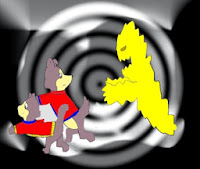 I don't think they're in New York any more...
Here is a Pound Puppies fanfiction, which was a collab between fellow writer brave kid and I(He had the initial idea for the story, and I wrote it up), which is the eighth in a series he and I will be writing in the future. In this story, the villainous Milton Feltwadde's nephew Morton injects a virus into the puppy pound's computer, which prevents the Pound Puppies from helping puppies and purries find their perfect homes. Lucky and Ace thus take on the task of being digitized into the computer and tracking down the virus, but things soon get very weird! Please enjoy!
Pound Puppies Generation Gap: Pups in Cyberspace
BTW, here are a few pics of the story's characters:
Roxie, the Dalmatian pup who first appeared in the episode, "Accidental Pup Star." She arrives at the pound just before the virus is discovered, and the Puppies and Kittens hope to get things cleared away in time for her to find her perfect owner.

The computer mouse who greets Lucky and Ace when they first enter cyberspace, and one of the spider cabbies that navigates the World Wide Web via taxi. 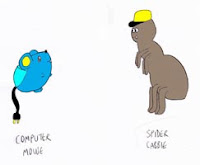 Auntie Virus, who guards cyberspace against pests, and the shopkeeper cat Lucky and Ace first meet upon entering a computer game, who gives them information on how to defeat the virus. 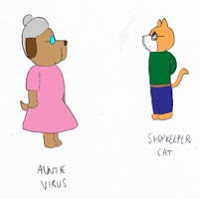 Slimey, the red slime who joins Lucky and Ace on their quest in the computer game, and his mother who comes to take him home at the adventure's end.

The large fat unicorn, enraged hippo, and gentleman water buffalo Lucky and Ace meet in a strange series of events leading to the cure for the virus.

One of the wood-chucking woodchucks Lucky and Ace meet in the forest, and the odd half-elephant Sphinx creature whose riddles they need to answer in order to find the cure.

And the little memory creatures Lucky and Ace meet upon finding the virus, and the giant ram which may be part of the key to defeating the virus once and for all.

Posted by iheartkatamari at 11:57 PM No comments:

Why, of course! It all makes perfect sense! :-D
Posted by iheartkatamari at 11:06 PM No comments:

A police officer was escorting a prisoner to jail when a gust of wind blew his hat down the street. "Would you like me to go get it for you?" the crook inquires.

"You must think I'm really dumb," the cop replies indignantly. "I'd like for you to wait here while I go get it." 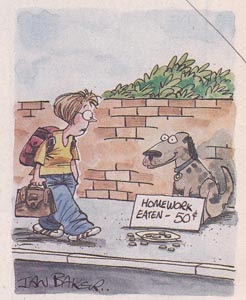 From Nickelodeon Magazine.
Posted by iheartkatamari at 11:04 PM No comments:

Okay, well! Let's all just back away slowly...

Posted by iheartkatamari at 10:55 PM No comments:

First Explorer: "I came across a large Bengal tiger in the wilds of India last week, and managed to capture him in my pajamas."

Second Explorer: "How in the world did a Bengal tiger get in your pajamas?"

From Nickelodeon Magazine.
Posted by iheartkatamari at 11:52 PM No comments:

A very, very Happy New Year to all! Here's to another most wonderful year!


And, in the spirit of ringing in the new year, we present to you this poem by Shel Silverstein: 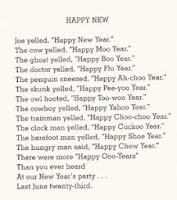 Hmm, maybe they overdid this celebration a bit?
Posted by iheartkatamari at 12:26 AM No comments: